[Vlog] Let’s Talk About 2017: Taking Leaps to Take Care of Myself

Note: Some links in this post are affiliate links. So if you decide to buy anything, I'll receive a commission at no cost to you. Thanks in advance!

This month, I recorded my first vlog-type video talking about some of the stuff I’ll talk about in this post:

About this Annual Review

In December, I sat down a bunch of different times to write one of these, and the words just wouldn’t come out.

Finally, frustrated, I deleted the Google Doc, decided to be done work for the day, and settled into a Grace and Frankie bingewatch.

But then I got to the episode where Grace is troubled by I-don’t-remember-what with her boyfriend, and Frankie introduces her to the power of vlogging.

“You’re going to have to vlog it!”

“When you vlog, you become your own personal therapist.”

And all this other Lily Tomlin comedy gold that ALSO made a lot of sense.

So I decided, “I’m gonna vlog this out.”

Because I just celebrated 6 months of working for myself full-time, and I’m dealing with a lotttt of emotions here. 🙈

It was my first year working for myself, my second year in business at all, a year of health scares (which still seems like too tame a word), an era of lifestyle changes, and a year that ended up looking *nothing* like what I thought it would.

(Yeah, I took a long-time side hustle full-time, and I can’t even say I crossed that off of a list of goals anywhere…that’s how off course things ran!)

For a “Type A all the way,” overplanning overachiever, the rare organized unicorn who does meet goals and resolutions (thank you very much!), that really stung. Since I was already in a funk feeling like I sucked all the time, it hit me hard.

But you know what?

When you roll things around a different way, I had an AMAAAZING year. That’s when I realized I needed to really do a a recap. Because I needed to find the sparkly side of things.

Once I recorded that video, so much clarity came that I felt like a giant cliche. I hate the phrase “aha moment,” but shit, that’s what it was.

While definitely my most difficult year to date, stuff like that makes you strong as hell (#unbreakable), and I don’t think I realized how much that fact is reflected in my year.

2017 is weird to talk about in terms of my business, because as much as it progressed in ways, my business wasn’t my priority.

It was a means to an end, to end the craziness of the past few years.

The reason I left my day job was not to grow my succeeding side hustle. I was working on it for literally less than an hour per week, and had stopped all client work, when I first started thinking about leaving.

It wasn’t really succeeding, it was barely alive. But I felt the same way about myself.

I just knew that I’d been constantly sick for almost two years, only getting sicker, and I was starting to become truly afraid of what would happen if I didn’t drop everything I could to throw everything possible at my health.

It culminated during a month when I literally spent more days inside a hospital than my day job’s physical office.

So I looked at my business and various side projects, how much they were earning relative to my time spent on them, and realized I needed to trust they’d be able to get me through this.

About 9 months since first seriously talking about quitting my job with my family, I’m here, I’m a thousand times healthier, and I’m figuring out this whole business thing.

I even call myself things like “founder” and “entrepreneur” on days when I’m feeling confident. 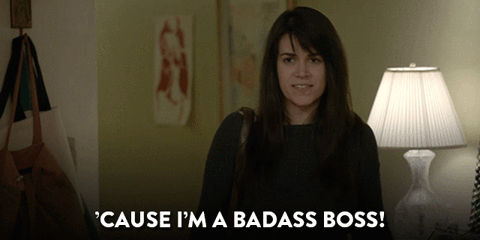 Celebrate wins and all that jazz! There were so many exciting smaller things I did last year, even if I wasn’t at full capacity to achieve one or two large goals.

Of course, I was a trainwreck at many times last year. So there were many, many things that went not-so-great and that I struggled with:

And, well, that last point…creating content of my own. That sounds like a good segue into 2018 plans, don’t you think?

What’s Coming Up Next

Because of all the overly optimistic planning I did in 2016 and 2017, this year I learned not to try to get detailed beyond a single quarter at a time.

What I basically did for yearly planning was pick one theme or goal for each quarter. Then as each draws closer, I’ll decide what projects accomplishing that goal will involve.

Like, Q3 will be focused on working on branding, but I haven’t set specific projects and dates around that yet. Since I’m committed to planning my business around my health and other unpredictable factors, I’m not putting pressure on myself to do more than that.

So here are the tentative plans:

And to call back even more wise words from Happy Endings, this shall be the YEAR OF BBERG!

I can’t wait to have you along for the ride. 😀