To paraphrase Mugatu, “Pinterest for business. So hot right now.” (That’s right, Hansel’s been bumped out of the spotlight!)

As I’m becoming more involved in the whole creative business niche, I’ve seen a passion for Pinterest that I hadn’t felt or seen in years. It inspired me, and I logged back into my account for the first time in over a year. I started pinning again.

And since it was around the time I also started blogging again, I knew I wanted to figure out how to make my blogs more Pinterest-friendly.

But the more I read about Pinterest-optimized blog graphics and see them “in the wild,” I couldn’t let go of one thing.

It’s for good reason, I won’t contest that. They look great ON Pinterest. But really, they’re so big! It can be so annoying, especially if that beautiful Pinterest-optimized image doesn’t necessarily mesh with the rest of your blog’s vibe.

Pinterest-optimized blog graphics can be annoying to deal with.

Even if you only have one pinnable image per post, where do you put it?

You can make it the post’s header image, but then your readers need to say ‘hello’ to scroll city. And I know, that’s not as big of a deal anymore, but it does still matter.

You can put it in the middle of the post, but then there’s a huge, scrolly gap between two paragraphs. When a blog post is meant to transition smoothly from one section to the next, that can make things awkward and break up the flow. An awkward silence, if you will.

Plus, what looks good on Pinterest may not look awesome with your blog’s design, even if they have consistent branding. I mean, they’re different mediums; it makes sense. A huge giant pinnable image can overwhelm the rest of your blog design

I love the idea of creating a customized pinnable image for every subheading or main point of a post. It lets your readers not just pin your post, but pin their favorite part. Such a personalized experience. 🙂 But if you do that more than once or twice in a post with Pinterest graphics, you’re buying your post a one-way ticket to scroll city.

So, I’ve been playing with other ways to make my blogs more pinnable, without having to give up the look I prefer for my posts. After lots of sleuthing and testing, I found a method I love: the Super Secret Pinnable Image.

Now, super secret pinnable images are just one part of my Pinterest marketing strategy. It takes a lot more than putting graphics in your blog post to get traffic, subscribers, and sales from Pinterest. And frankly? This was the only good Pinterest idea I’ve ever head. ¯\_(ツ)_/¯

Everything else that I’ve done to make Pinterest my #2 source of traffic each month, and my #1 social referrer? I learned all that in Pinfinite Growth.

Pinfinite Growth is an amazing ecourse from Melyssa Griffin that I took in early 2016, right when I was relaunching this blog. I knew that if I got it right from the start, Pinterest would be key to growing fast. And with Melyssa’s strategies for optimizing my profile, curating pins, and optimizing my own content, it was.

How to Add Your Own Super Secret Pinnable Image

All you’re doing with this tactic is adding a Pinterest-optimized graphic to your post, but then resizing it down until it’s a little speck that Horton the Elephant would get too emotionally attached to. Aka 1×1.

My sneaky little images are 1 pixel by 1 pixel.

In WordPress, just insert the Pinterest image wherever you want to hide it. Then, hover over the image until the actions menu pops up, and click the edit button. Then select “Custom Size” from the size drop-down menu, and resize the width and height.

Update: This method has stopped working for me in WordPress, and I’ve heard several other bloggers say the same. Luckily, we have a few other tricks up our sleeves!

If resizing isn’t your thing or isn’t working for you, just hide the whole damn thing:

Just wrap the graphic in the following div tag:

Both options take about 5 seconds, start to finish. 🙂 Quick enough that I didn’t even make a how-to gif, and you know how I love those!

How to use super secret pinnable images on your blog:

As you can see, it’s stupidly simple to do this trick once you know about it. A perfect example of #TheMoreYouKnow! Haha 🙂

Since it’s so easy, why not use it to the max? Here are a few ways you can use hidden graphics:

Worried that people won’t know you want them to pin your post, when there’s no visible image begging for it?

There’s an easy fix for that, too. Try clicking this!

Yup, you can create a customized “Pin it” link to go with your hidden image!

Just download this Pin It URL Generator from Ripen Ecommerce. The free spreadsheet is pretty self-explanatory: just fill out the URL for the image, the URL it should link to, and the pin’s description. The formula will then plug what’s in those cells into the resulting URL!

From that, you can include a customized Pin It graphic or text CTA, instead of a giant image.

Again, something crazy useful that takes just a few seconds once you know it exists. Those are my favorite kinds of discoveries by far!

This little trick is a simple, 5-second way to make your blog better without sacrificing Pinterest traffic. It also opens up opportunities to make your posts even more pinnable. And can act as a mechanism for headline testing along the way.

Talk about low-hanging fruit. That’s why this is my new favorite optimization tactic!

Are you going to try this? Pin it to save for later!

Note: This post was originally published in October 2015 and has been updated to reflect that the resizing method wasn’t working for people anymore. 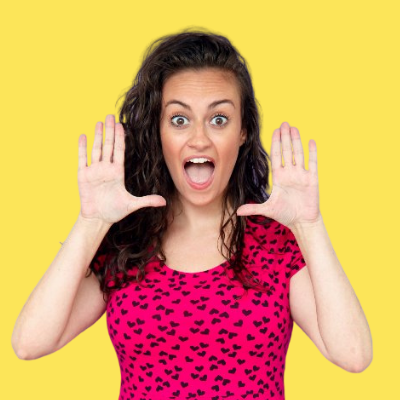 Oh hey! Want to get more results from less content instead of burning yourself out on the constant content treadmill? Then I need to be your new best friend. 🙌 Let's get to know each other.