Not gonna lie, I’m really proud of myself for that title.

The alternate one was: Things Oprah and I both love: bubble baths, bread, and content repurposing (I'll save it for the email about this).

I’m also really proud of Oprah, because the latest news from her media empire proves my whole brand premise once again.

The reason that I write about pop culture and the entertainment industry so much in my business isn’t JUST because I love pop culture.

It’s also because that industry totally gets how to squeeze maximum value out of a piece of content.

I’ve said this before with things like Cardi B and Bruno Mars and the Finesse remix, Lil Nas X and Old Town Road, and countless other examples.

And I'm gonna say it again about Oprah's latest podcast.

The entertainment industry is full of great inspiration for remixing and repurposing podcast, and Oprah’s latest podcast is more proof of that.

If you don’t know what I’m talking about, last week her company announced a new Oprah podcast.

Only, they’re not getting her into the studio…she’s got enough to do already.

This whole podcast is repurposed content from earlier in her career. As my favorite subhead about the news put it, what they did was “take all the IP, and make it a podcast:”

Headline and news article from The Verge

It’s a genius strategy for resurfacing her greatest hits.

The episodes are gonna be short clips featuring past interviews dating back to the 80’s, with people who weren’t that famous at the time but are now. Think people who got their career start appearing on her show, like Dr. Phil, Dr. Oz, and Suze Orman.

Now let’s break down what’s so brilliant about it.

Oprah has had an extremely loyal fanbase for decades, with people like my mom and RuPaul’s character in AJ and the Queen who used to tape episodes on VHS.

And while Oprah has gone on to do other things on her own network, magazine, and more, those episodes haven’t really existed anywhere other than those old home-recorded VHS tapes.

As far as I can tell, you can’t watch them on any of the major streaming platforms, and OWN’s YouTube channel just has random, mostly newer episodes. If you did find and watch an old episode, it wasn’t through Oprah’s own brand, so they weren’t making money off of it.

Plus, even if all her old show episodes were on something like Netflix, there’d be so many of them, specific episodes like her best episodes wouldn’t be easily discoverable.

Next, she’s reformatting them instead of simply reposting them.

But like I just said, with that approach and with her amount of content, that would have ended up overwhelming her audiences with a lottttt of old stuff, a lot of which isn’t as rewatch-worthy as the greatest hits.

That’s why she’s not just creating audio versions of old episodes either, she’s splitting them up and pulling out specific segments and highlights.

This lets her leverage other people’s audiences.

Over the years, she’s had tons of fabulous discussions with both celebrities and non-celebrities.

But if you look at who she’s featuring on this podcast, it’s a very specific type of guest: people who are now also in the same personal development/self-improvement space she’s in.

This means when the new episodes go live, those people are probs going to mention it to their own huge audiences of people interested in the kind of content Oprah’s putting out consistently.

That’s not a coincidence.

I’m definitely gonna be keeping an eye on this and how her brand continues remixing their content – who knew Oprah and I had anything in common besides loving bread and bubble baths?

What does Oprah’s latest podcast teach marketers about remixing and repurposing content? 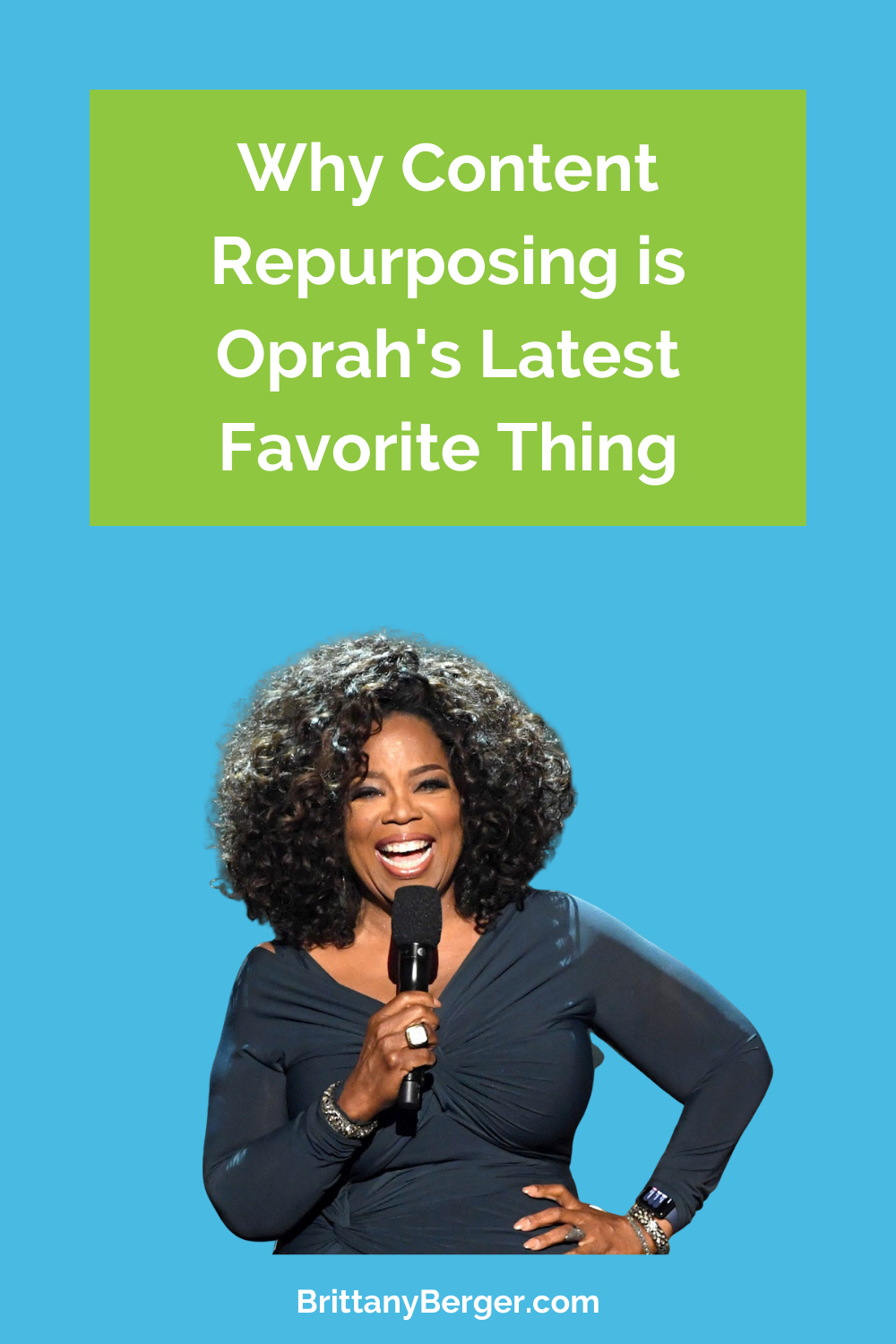